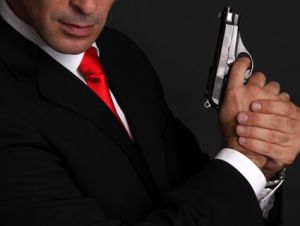 Official agency portrait. Richard Peterson/Shutterstock
With the US military pretty much out, and with spillover from the conflict in Syria coming in, CIA operatives in Iraq are doing exactly what you'd expect them to do.
The Wall Street Journal reports:


The Central Intelligence Agency is ramping up support to elite Iraqi antiterrorism units to better fight al Qaeda affiliates, amid alarm in Washington about spillover from the civil war in neighboring Syria, according to U.S. officials.
The stepped-up mission expands a covert U.S. presence on the edges of the two-year-old Syrian conflict, at a time of American concerns about the growing power of extremists in the Syrian rebellion. Al Qaeda in Iraq, the terrorist network's affiliate in the country, has close ties to Syria-based Jabhat al Nusra, also known as the Nusra Front, an opposition militant group that has attacked government installations and controls territory in northern Syria...In a series of secret decisions from 2011 to late 2012, the White House directed the CIA to provide support to Iraq's Counterterrorism Service, or CTS, a force that reports directly to Iraqi Prime Minister Nouri al-Maliki, officials said.
[...]
This shift to the CIA [from the U.S. military] in Iraq also is in line with the Obama administration's goal of limiting the U.S. role in the Syrian conflict. The administration is providing nonlethal assistance to the [Syrian] opposition, but refuses to send weapons, in part to avoid aiding extremist elements among rebel forces.

There are roughly 220 American military personnel in Iraq currently working for the Office of Security Cooperation-Iraq—and after several military sites get shut down, the number is expected to drop to about 130.
The CIA's ramped-up role comes nine months after officials signaled that the agency planned to cut its presence in Iraq to fewer than half that of wartime levels, when their station in Baghdad included over 700 agency personnel and ranked as the biggest CIA station on the planet. ("Right-sizing," as Obama aides called the CIA drawdown.) Still, as senior US officials made clear last year, Baghdad will of course remain one of the agency's largest stations in the world.
Posted by Unknown at 12:21 AM