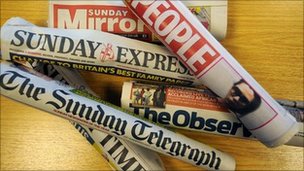 As the 10th anniversary of the invasion of Iraq draws near, the Sunday Telegraph says Tony Blair has "major new questions" to answer about the conflict.

Sir Christopher Meyer, who was Britain's ambassador to Washington, tells the paper that Mr Blair's world view was "more evangelical than the American Christian Right"."

Military commanders write of the lack of time they were given to prepare because of "political nervousness" about publicly committing to sending troops.

Mark Etherington, a Foreign Office official who was sent to govern an Iraqi province, says he "never met an Iraqi who viewed the country's occupation with equanimity."
Dictator fall
The Observer has tracked down an Iraqi man who became the "face of the fall of Baghdad", when he was photographed helping to demolish a huge statue of Saddam Hussein.

But he says nothing has changed for the better: "Then we had only one dictator. Now we have hundreds."

The difficulties of managing a country after the fall of a dictator are also highlighted in the Sunday Express.

One of Egypt's most eminent archaeologists tells the paper that ancient sites have been turned into farmland and thousands of illegal digs have taken place since the revolution.

Dr Zahi Hawass says the edifice of one pyramid has been left pockmarked "like a Swiss cheese", as looters carry out excavations to plunder its treasures.
Regent question
Several of the tabloids' front pages show photographs of former England footballer Paul Gascoigne alongside dramatic headlines.

The paper reports that Gazza's life "hung by a thread" as he lay in hospital in the US, where he was receiving treatment for alcohol addiction.

He says the experience has inspired him not to drink again.

"Is Britain ready for a regent?" asks the Sunday Times.

Fifty-one per cent of the British public think not, according to a poll carried out for the paper.

Royal biographer Robert Lacey says he does not think the Queen "cares tuppence about what's fair for Charles", and he believes that - unlike the Pope - she would never abdicate.
Deciding ballots
The selection of a new Pope is shaping up as a battle between Romans and Barbarians, according to the Observer.

"Many of the cardinals in Rome are seething with resentment" towards the Vatican administration because of what the paper describes as the "blunders" which marred Benedict XVI's papacy.

The "Barbarians", led by cardinals from the US and Germany, want to see a new broom sweep through the Vatican.

But the floating voters of the emerging countries are likely to cast the deciding ballots.

Hollywood is revisiting one of the oldest scripts, says the Sunday Times.

This being Hollywood you will not have trouble keeping up even if you have forgotten the original story, says the paper's editorial.

And it will be easy to spot that the Egyptian pharaoh is a baddie: "He'll be the only one with a British accent."
Posted by Unknown at 1:40 AM