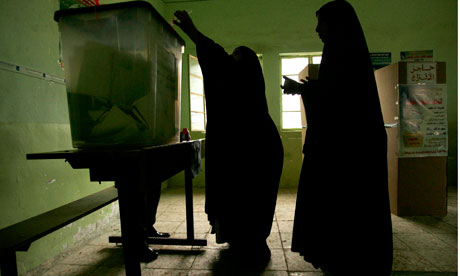 'While the 2005 elections were heralded as an important marker on the road to democracy, they actually served to exacerbate inter-communal tensions in Iraq as politicians increasingly used sectarianism to mobilise support.' Photograph: Matt Dunham/AP
There is a temptation to draw a line under the Iraq war and to write it off as a regrettable occurrence, best consigned to history. But there is much we can learn from the experience about the challenges facing countries in transition, the limitations of our power and the unintended consequences of foreign intervention.


While the rationale for intervening will always be based on an interpretation of national interests, the levels of local, regional and international support will influence its chance of success. The legitimacy of the Iraq intervention was disputed from the outset and can only be understood against the backdrop of 9/11 and American fear of a further attack on the homeland.


Lesson two: interventions need to have limited, clear and realistic goals – and be well resourced


After the failure to find weapons of mass destruction in Iraq, the rationale for the war shifted from regime change to the grandiose scheme of implanting democracy. There was always a mismatch between goals, plans, organisation and resources.


Lesson three: the collapse of the state leads to communal violence


In any society, it is the state that provides the framework in which different communities co-exist and compete. The challenge is how to purge a regime of its worst elements while at the same time maintaining the state. The decisions taken by the US-UK coalition to formally occupy the country (without enough forces), dismiss the Iraqi security forces (rather than recall them) and implement deep de-Ba'athification (rather than only remove those who had committed crimes against the Iraqi people) led to the collapse of the state and communal violence.


Lesson four: an inclusive elite agreement is critical to gain widespread support for the new order

The elite pact cobbled together in Iraq essentially ensured Shia Islamist domination, supported by Kurdish nationalists. It was heavily weighted towards exiles who had opposed Saddam and who used their relationship with the coalition to exclude key sections of society who had remained in Iraq all along. The road map for transition, therefore, was rejected by those barred from the new order – it led not to stability but to greater violence.


Lesson five: elections do not necessarily bestow legitimacy on the new order

While the 2005 elections were heralded as an important marker on the road to democracy, they actually served to exacerbate inter-communal tensions in Iraq as politicians increasingly used sectarianism to mobilise support. The new elites were more focused on capturing power than on delivering services to the people. Electoral systems are not neutral and the way in which they are designed can affect relations between and among communities. While the first election brings new elites to power, it is the second election that determines how these elites will yield power. It defines whether the new order will be one in which power will be shared or transferred peacefully and democratic bodies strengthened – or whether the state will be captured and institutions subverted to the will of the new autocratic rulers.

The intervention in Iraq led to civil war and the deaths of over 100,000 Iraqis. It turned the country into a battlefield of regional powers, rather than a buffer. The weakness of the new Iraq has helped enable the resurgence of Iran, setting off a regional power struggle between Saudi Arabia and Turkey on one side and Iran on the other – with tragic consequences in Syria.
There is a risk that we will take the wrong lessons from Iraq. Billions of American and British taxpayers' money was spent on "nation building" in Iraq with unimpressive results as the "new order" remained highly contested. We put insufficient effort into brokering national-level reconciliation between Iraq's elites and into ensuring checks and balances on the power of the executive. And we wasted energies on initiatives that were neither critical nor sustainable.
The Iraq we left behind is drifting towards authoritarianism and disintegration – rather than towards democracy. Some officials continue to place all the blame for Iraq's woes on "ancient hatreds" between the different communities – or to blame al-Qaida and Iran. Saddam's violent rule certainly had created "modern" hatreds among communities that had lived together, mostly peacefully, for centuries – but inter-marriage between Sunni and Shia people remained common and so did a sense of Iraqi identity, at least among the Arab population. Al-Qaida and Iran definitely exacerbated the violence in Iraq – but were not the cause of the civil war. Likewise, there is little reflection on the impact of past policies: our unwillingness to protect the Shia from Saddam's vengeful slaughter after their uprising in 1991; and a decade of sanctions which led to the deaths of tens of thousands of Iraqi children, destroyed the middle class and yet strengthened the grip of the regime over society.
If we internalise the right lessons from Iraq, we will develop a better match between our national interests and our capabilities. If we do not do so, we may well be destined to make wrong assumptions when we consider how to respond to increasing instability in the Middle East.
Posted by Unknown at 8:13 PM