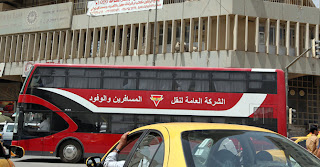 Common across Baghdad in years past, red double-decker buses are again plying the Iraqi capital's traffic-choked streets after many were ransacked in the years of unrest following the 2003 invasion.
The brand-new red buses with long white and black stripes on their sides began limited operations on Saturday, making halting progress amid masses of taxis and pedestrians in central Baghdad.
They have metal floors and plastic seats that are comfortable enough, though somewhat cramped for taller passengers. Air conditioning keeps the buses cool in spite of the Baghdad heat, which will only worsen in the summer months.
One bus was packed with boisterous Iraqis who were pleased by the features, especially the air conditioning. 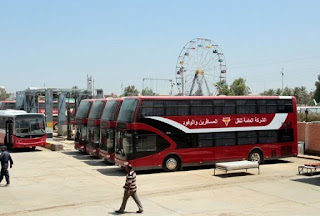 "With this comfort, I will stay here enjoying the air conditioning and won't get off until the electricity generators start working in our area," joked Kadhim Karim, a 31-year-old musician.
"The new bus contains all the amenities, including air conditioning and cleanliness," said Kadhim Saba Rasan, 57, a government employee.
Only 70 buses have so far been bought from a Jordanian firm -- 60 double-deckers and 10 single-storey buses -- but 100 more are expected to be added later this year, said Adel al-Saadi, the director general of the state-owned firm responsible for public transport.
Even at its peak before the 2003 US-led invasion, the Baghdad bus network was a limited one. Its 300 buses at the time pale in comparison to the 8,500 that ply London's streets, according to the British capital's public transport authority. 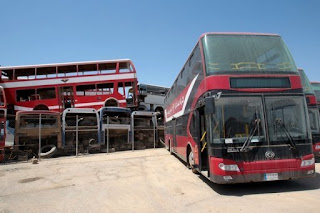 This despite the fact that London's population of seven million is not vastly greater than Baghdad's six million residents.
The firm providing Baghdad with the buses, Jordan-based Elba House, first made its name constructing pre-fabricated buildings, but since 1992 has also built a variety of vehicles, including buses.
Each double-decker bus costs around $205,000.
Tickets for the buses are 500 Iraqi dinars, about 40 cents, offering a far more comfortable alternative to the cramped minibuses that criss-cross the city, and one that is cheaper than the fleets of mustard-yellow taxis.
"The new buses are very successful and better than taxis, which cost at least five or six thousand dinars ($4-$5)," said Mohammed Samir, an 18-year-old policeman.
Security remains a key priority in a city where brutal sectarian bloodshed killed countless residents, partitioned off key neighbourhoods and badly damaged Baghdad's infrastructure in the years following the invasion that ousted dictator Saddam Hussein. The buses are equipped with cameras that allow the driver to monitor both floors of the interior, and Saadi said that each bus driver will work with an assistant whose role it will be to monitor the vehicle for signs of explosives and to search each passenger getting on the bus.
But while an assistant collecting fares was present on one of the buses, many passengers were not searched.
Samir, the policeman, said that he thought it would be better if they were searched.
Smoking, which is banned on the new buses, is another challenge -- one passenger lit up soon after sitting down on the upper deck of the bus, and the numerous cigarette butts in the trash bin indicated that he was not alone. 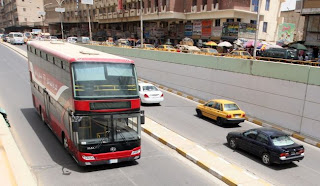 In the immediate aftermath of the US-led invasion of Iraq, while many people stayed at home and government buildings were all but shut, the red double-decker buses would still traverse the city from 7:00 am every day.
As worsening violence racked the city, many bus drivers transformed their vehicles into ad hoc taxis, ambulances and hearses. Over time, though, looting and pillaging across Baghdad eventually targeted the city's buses.
Rasan, who said he had ridden Baghdad's old double-decker buses and now on one of the new buses as well, described the style of bus as a fixture of the Iraqi capital.
"These buses are a beautiful means of transport and represent a part of the history of Baghdad," he said
Latest Iraqi related news from: www.baghdadinvest.com