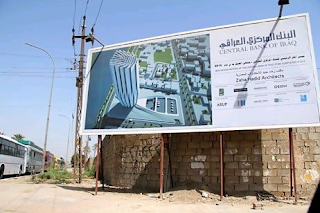 
Noaman Muna returned to his native Iraq five decades after fleeing chaos and revolution in the 1950s.

"If I wasn't optimistic, I wouldn't have returned," says Mr Muna, who went back to Baghdad three years ago as a project manager to build the new headquarters of the Central Bank of Iraq after working at major architectural practices in London.

A decade after the United States war that ousted Saddam Hussein, plans are being drawn up to design a mega-city and urban planners and architects such as Mr Muna are at the vanguard.

Beyond the grey concrete walls and endless security checkpoints that pepper the city, cranes have been erected for the first time since 2003.

Bricks and building materials spill on to the streets, while hoardings show renderings of futuristic building projects that would rival any modern city.

"We haven't had a major development in Iraq for many years," Mr Muna says. "We had some infrastructure projects in the 1970s and '80s, monuments, but not functional buildings that serve the community. They are modest compared to what Iraq needs at the moment."

With more than 95,000 square metres of space on 40 floors, the proposed central bank will be the tallest building in the city and overlook the Tigris River from the fabled Abu Nawas Street, named after one the most revered classical Arabic poets who appears several times in the book of OneThousand and One Nights. The building is scheduled to be complete in 2016.

Designed by the Iraqi-born British architect Zaha Hadid, the central bank building will attempt to mix and modernise features of the Sumerian Ziggurat and the Samarra - both renowned temples that are a part of Iraqi heritage.

The first is a steep pyramidic structure with a flat top similar in style to representations of the ancient Hanging Gardens of Babylon. The latter resembles a great stone helter-skelter atop an enormous plinth.

"It needed to be a unique and iconic building that represents a new emerging Iraq," Mr Muna says.

Set at the end of the Karrada district, the central bank is near an island lined with lush palm trees, opposite the green zone. The island was originally planned as a cultural centre that would have housed a giant opera house designed by the American architect Frank Lloyd Wright in the 1950s, but scrapped after the socialist revolution that ousted the monarchy in 1958.

The island is known as Madinat Al A'aras, or "City of Weddings", as it was a prime location for luxury weddings in the 1980s. Suffering after years of war, sanctions and travel bans, newlywed Iraqis would honeymoon on this secluded tropical island, holidaying in chalets hidden among the palm trees.

Today, there are plans for the wedding island to be renovated as a leisure hotspot in the heart of the capital.

"We are inviting investors to help develop this land," says Osama Al Kaseer, an engineer consultant who was awarded a US$4 million (Dh14.6m) contract by the mayoralty of Baghdad to redevelop the master plan of the city. "It will have recreation: five-star hotels; tennis courts; cafes and casinos."

Mr Al Kaseer is the representative of a joint venture in Baghdad that comprises Khatib & Alami, a Lebanese architecture firm the main office of which is in Beirut; Pacific Consultants International, a Japanese construction company; and the Iraqi firm Medex.

Mr Al Kaseer faces a major task updating Baghdad's master plan to accommodate the current population of about 6 million, which is expected to double by 2030. The plan was last updated in 1972.

"We are thinking of accommodating some extra population into 'satellite cities' within a radius of 60km from the centre of Baghdad," he says. Urban planners are looking to Lebanon for inspiration as they rebuild Iraq after security improved following the sectarian conflict of 2006-2008. Beirut's reconstruction efforts after the civil war that took place from 1975 to 1990 attracted billions from foreign and local investors and re-established the capital's position as the "Paris of the Middle East".

"You have the Solidere area, which was completely ruined by the civil war," Mr Al Kaseer says. "Now it is really beautiful."

Baghdad's Rasheed Street, a bustling site of commercial activity during the Ottoman Empire, is now in a sad state with broken windows, graffiti and dilapidated porticoes housed by car repair shops and stores selling knick-knacks.

Architects involved in the restoration projects have drawn up the designs for the street modelled on Paris in 1916, as an Iraqi version of Beirut's Solidere district, filled with modern malls, cobbled walkways lined with shops, palm trees and fountains.

"Every Iraqi would agree for its restoration," says Caecilia Pieri, the head of the Urban Observatory at the IFPO Institute français du Proche-Orient based in Beirut and the author of Baghdad Arts Deco: Architectural Brickwork 1920-1950.

"It's where you had new shops from Europe in the 1920s, banks, and nearby in the cafes is where the artists, poets and singers would meet," she says.

"Rasheed Street really stood as the backbone for the urban middle class."