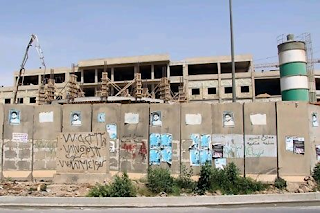 Baghdadis who traditionally flocked to the old bazaars on the streets in the Karrada district will now have their very own shopping mall.

Construction of Baghdad Mall has started and the US$100 million (Dh367.3m) project in the affluent neighbourhood of Al Harthiya will include a shopping centre, a five-star hotel, a state-of-the-art medical centre, a gym and a giant covered parking lot.
The mall is expected to transform the shopping experience in Baghdad, said Haj Mohammed, one of the five private investors at Dar Al Sabah, an Iraq-based contracting firm that entered in a joint venture agreement with the Turkish contractor Tefirom to build the mall.
"In Iraq, retail shops have to manage with power cuts throughout the day, business has also been hurt because of the increased security crackdown, the checkpoints and difficulty with parking space has really lowered the amount of footfall you see in the commercial areas of the city," he says.
"In Iraq, if you just leave your car on the streets security officials would be suspicious that it has a bomb."
Many international retail shops, such as Mango and Zara, have entered the Iraqi Kurdistan region with the arrival of new shopping malls, drawn by the facilities and increased level of security that come with them.
Mr Mohammed expects to see the same level of interest from international brands in central Iraq when the mall is finished, which is due to be by the end of next year.
Baghdad Mall will have 16,000 square metres of leasable space.
"We have already received many inquiries from international shops that already have presence in Erbil, as well as from local shops, particularly jewellers, who would see the opportunity renting space here," Mr Mohammed says.
On completion, Dar Al Sabah expects to hire an international mall operator to manage the day-to-day requirements of the shopping centre and ensure that standards are similar to levels seen in the Gulf.
It will also invite an international hotel chain to manage the hotel.
Many foreign companies that have shown interest in expanding their operations into Baghdad have come across a range of difficulties, such as access to financing, dealing with rampant corruption, and restrictive regulations, Mr Mohammed says.
There are a range of foreign investment initiatives to rebuild the country that require the government to be a partner and this has been seen as a main reason for project delays and why foreign companies are still slow to enter the country.
"Baghdad Mall has been successful only because it was purely a private investor and private sector affair," Mr Mohammed says.
"Laws need to be updated. Right now, you have a liberal government that is open to foreign investment, but laws that date back to the socialist regime."