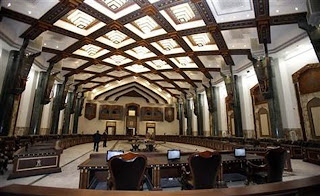 Iraq has spent hundreds of millions of dollars in a bid to ensure the upcoming Arab Summit in Baghdad on March 29 is a success but analysts believe their efforts may lead to naught.

“There won’t be any high-profile attendance at the Arab Summit in Baghdad,” said Ali al-Zakari, a UAE-based political analyst, citing division amid an Arab Spring-hit region as the reason.

“It is expected that no important decisions will be made towards countries like Syria or Somalia,” Zakari added.

Late February, the conference of “Friends of Syria” did not lead to any consensus among Arab countries; Tunisia pressed for stricter sanctions against the government of Bashar al-Assad but not for military intervention, while Gulf countries who support military intervention in Syria, seem to be leading calls for the arming of the Syrian opposition.

In Iraq, Prime Minister Nouri al-Maliki has warned that toppling the Assad regime could result in the rise of Islamists in Syria, henceforth dire consequences to be expected in Iraq that is already suffering from al-Qaeda. Because Syria was expelled from most Arab nations, as well as suspended from the Arab League for its refusal to halt its crackdown on protestors, it was not invited to the Baghdad meet.

“The only way for the summit to be successful is if high-profile figures come together to send a strong message to Iran, but the current mood is not for escalation [of tension],” Zakari added.

On Wednesday, Iraq’s deputy foreign minister announced that that U.N. Secretary-General Ban-ki Moon will attend the upcoming summit, but analysts are skeptical about that.

“Attendance of Ban-ki moon or other representatives of certain organizations will be as mere observers.”

Meanwhile, a Jordan-based political analyst who wished to remain anonymous said that Baghdad’s announcement of Ban’s attendance is an attempt to show that the meet will have “international” attendance. The analyst said that with or without high-ranking officials’ attendance, Ban is there to make use of the event to talk about international issues related to Iraq such as Camp Ashraf, a camp that houses members of the anti-Iranian group, People’s Mujahideen Organization of Iran.

Apart from the divisions with the Arab nations, Iraq’s political schism and Iran’s influence in its politics threaten to make the summit ineffective, said the Jordan-based analyst.

“If Iraqis do not reconcile, the representation of Arab states will be at a ministerial and ambassadorial level … and this depends wholeheartedly on Iraq,” he said.

The Gulf countries had, after all, demanded Iraq’s divisive factions to put their problems aside and work towards creating a solid national partnership government and oppose the one party domination that is Maliki’s State of Law coalition. Gulf States see Maliki’s coalition as an ally to Iran so they are hesitant to have its highest-ranks officials attend the summit unless Iraq fulfills the precondition of a partnership government, the analyst said.

Ground realities, however, show that the divisions run deep and pose incredible challenges to governance.

There was ambiguity on whether Maliki or the Iraqi President Jalal Talabani who, according to the country’s constitution, must represent Iraq at the upcoming summit.

Rumors that Talbani may not even be at the summit were rubbished by a source who told the London-based Asharq Alawsat newspaper that while the president is going to the U.S. for medical reasons, he is expected to return on March 12, rebuffing critics that there is an Iranian pressure to make the president hand over responsibility to Tehran’s ally Maliki to head the summit.

Other Iraqi factions also do not wish to see Maliki’s coalition succeed.

The secular yet Sunni-backed Iraqiya List headed by Ayad Allawi who is currently in Turkey, is lobbying against the summit. Iraqiya List says that Iraq is not ready to host the Arab Summit in Baghdad as the country’s politicians are divided and won’t represent the country under one voice which in turn will weaken the country’s position.

According to the Jordan-based analyst, Maliki’s making the summit successful will mean that his faction has won over against others and that an Iran-ally bloc has finally won the acceptance of the Arabs.

Another Jordan-based analyst, Ahmed al-Abyadh, said that a successful Arab Summit in Iraq should be seen as an achievement for all Iraqis, and Iraqiya is short-sighted in not wanting the summit to be an effective one.

Abyadh said the constant prodding by Gulf states demanding Iraq end its political division is an intervention into the country’s affairs.

Iraq, a founding member of the Arab League, has not hosted a regular Arab summit since November 1978, but an extraordinary summit was held in Baghdad in May 1990, just months before Saddam Hussein’s invasion of Kuwait.

Iraq which has spent at least $450 million in preparation for the summit that was supposed to be held on March 29 last year has recently received 400 Chevrolet armored vehicles to transport senior foreign officials. It has been criticized by sections of the public for wasting money that is badly needed to build the country’s infrastructure on a summit.

Iraq has also prepared itself diplomatically. Iraq and Saudi Arabia saw closer ties as the Kingdom named an ambassador to Iraq for the first time since Kuwait’s invasion. Iraq’s Foreign Minister Hoshiyar Zebari said that Iraq has also compensated Kuwait $4 billion in 2011.

Latest Iraqi related news from: www.baghdadinvest.com
Posted by Unknown at 12:19 AM