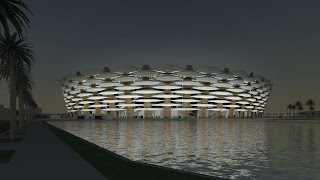 Basra is the capital of Basra Governorate, in southern Iraq near Kuwait and Iran. Basra is Iraq's main port, although it does not have deep water access, which is handled at the port of Umm Qasr.
The city is part of the historic location of Sumer, the home of Sinbad the Sailor, and a proposed location of the Garden of Eden. Basra has an important role in early Islamic history, being built in 636 CE, or 14 AH. It is Iraq's second largest and most populous city after Baghdad.

Basra sports city is the largest sport city in the Middle East, located on the Shatt al-Basra.
The construction was started on 15 July 2009 and expected to be completed in 2012. The sports city is being funded by the government of Iraq with a budget spending of $550 million dollars, contributed to contain main stadium with capacity of 65,000 people, secondary stadium with capacity of 20,000, four Five Stars hotels and other sports related facilities.
The contract of this project was given to Abdullah Al-Jaburi, a major Iraqi construction contractor, two American companies, 360 architecture and Newport Global.
This project will play host to the 2013 Gulf Cup of Nations that will be held in Iraq.

A man-made lake in the shape of Iraq encircles the stadium.

Basra Sports City is not a pipe dream. Construction is already well underway, with completion expected by 2012. The Youth Ministry Undersecretary stressed recently that work in the sports city in Basra is moving smoothly according to its time table.

Isam al-Diwan, at a recent press conference, disclosed that 80 percent of the project was completed.

The project includes a number of play areas, in addition to Tennis and Bowling playgrounds, sports halls, housing complex and other services facilities.

But for Iraq's football-mad masses, at least there's the possibility of seeing some top-quality international games on home turf.

The project can restore the Iraqi people's sense of pride and national identity – much needed.
Latest Iraqi related news from: www.baghdadinvest.com
Posted by Unknown at 12:43 AM